U.S. Bureau of Land Management (BLM) officials are reviewing a second attempt at a modified plan of operations submitted by Rocky Mountain Industrials (RMI) on Jan. 6.

RMI submitted its first modified plan on Oct. 7; BLM found the plan to be incomplete. The agency issued a letter on Nov. 9 ordering RMI to submit a revised plan within 45 days, setting out a lengthy list of issues for RMI to address. That deadline would have arrived Dec. 30.

“They requested a two-week extension. We split the difference and agreed to one week,” said Larry Sandoval, field manager for the BLM Colorado River Valley Field Office in Silt. RMI met the delayed Jan. 6 deadline.

Now, BLM is reviewing the revised plan for completeness.

“We started with the geologist in our local office, and we’ll bring in a hydrologist for the water issues, an ecologist for the reclamation, and the lead geologist at the state office,” Sandoval said. “The regs allow us a 30-day review. Based on the limited scope of what we are talking about, it may not take the full 30 days, unless there are major defects.”

BLM is caught between meeting timelines laid out in its mining regulations and the need for what it deems to be a complete submission.

“Their violations are still hanging out there, and we’ve got to get this right to address those issues,” Sandoval said.

The agency is viewing this process to deal with RMI’s noncompliance problems as a “major plan modification.” That means it will go through some sort of public review process, such as an environmental assessment, giving the public one or more opportunities to comment.

RMI prohibited from blasting during winter to protect wildlife 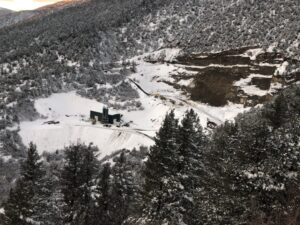 In the meantime, RMI continues to operate the limestone quarry, although it is barred from conducting any rock blasting during the winter months.

Garfield County issued a mining permit that barred most mining operations from Dec. 15 to April 15. However, BLM has been granting exceptions since 2009 that allow all operations to continue except for blasting, Sandoval said.

The concern is over critical winter range in the area for deer, elk and bighorn sheep. The slopes around the quarry are not areas where herds settle in during winter, Sandoval said, but they do pass through.

In consulting with Colorado Parks and Wildlife biologists, he said it appears the herds are “used to trucking, rock crushing and screening, as well as snowmobile traffic in the area.”

Blasting with heavy explosives, however, delivers a sudden and unexpected loud noise that startles herds and may cause them to expend precious energy to flee.

“We stood firm on blasting. They are barred from blasting during the winter,” Sandoval said.

BLM’s stalled efforts to produce a mineral examination study of the limestone deposit remain “in a holding pattern,” said Sandoval. It’s the same thing he told us in January 2022.

The study was launched in 2019 when RMI submitted a proposal to expand the existing quarry — permitted for 16 acres but actually occupying about 20 acres — to 321 acres. The proposal incited widespread opposition in Glenwood Springs and the surrounding region.

The key report, called a Determination of Common Variety, will ascertain whether the limestone deposit extending up the slope from the current quarry qualifies for expedited permitting under the Mining Law of 1872. If it does not qualify, RMI would have to go through a more rigorous permitting process to win BLM approval, and would have to pay royalties for the limestone it mines.

BLM officials originally expected to complete the DCV report in 2020, but the study is still in process at the state and federal levels of the agency.

“The last I heard, it would be sometime this spring,” Sandoval said.