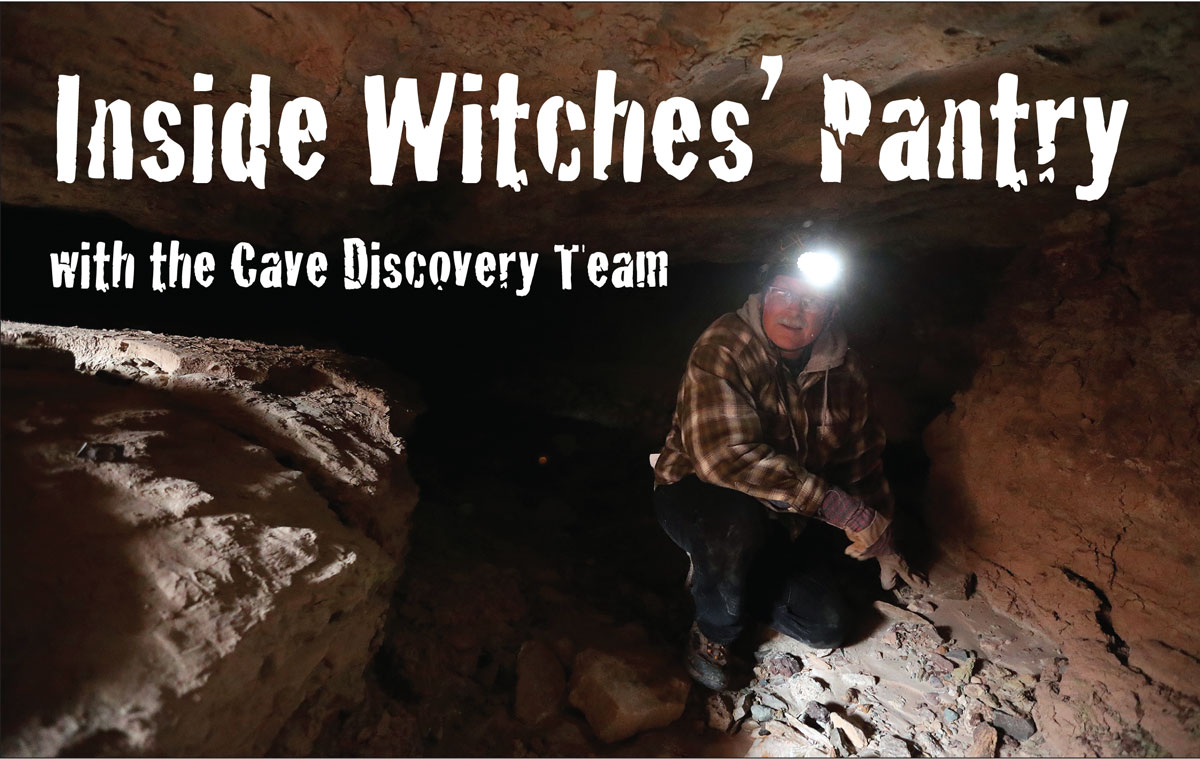 Inside Witches’ Pantry with the Cave Discovery Team

In January 2020, a group of Western Slope cave explorers announced the discovery of a previously unknown cave on the Transfer Trail mountainside north of Glenwood Springs. They called it the Witches’ Pantry.

On Feb. 29, two of these cave experts, Rob McFarland of Rifle and Richard Rhinehart of Grand Junction, will give a talk and slide show on the history of the many known caves in the Glenwood Springs area and their recent discovery of Witches’ Pantry.

In 2019, McFarland walked nearly 300 miles in a form of wandering that led to the discovery of four previously undocumented caves in Garfield County. He found one of these, while on a ramble with Rhinehart, in October.

When they descended into the cave for an initial exploration, they found a cone of debris below the nearly vertical cave entrance. In the chamber beyond the entrance, they found mixed animal bones, cactus spines, animal scat and other evidence of packrats.

With October in the air, McFarland considered several names for the new discovery before settling on Witches’ Pantry, a bow to Halloween and the sundry array of material packed in the cave chamber.

They found a cramped chamber with an opening to a low, narrow crawlway. The crawlway connects to a narrow, vertical fissure in the rock, which drops down to a lower level and appears to continue deeper into the mountain. Because of breezes the cavers felt blowing underground, they believe cave passages may extend further and in other directions.

For the presentation, McFarland will tell the story of the cave discovery, and Rhinehart will explore the modern history of the many famous caves around Glenwood Springs, beginning with the exploration of the Vapor Caves in the 1880’s, followed by Cave of the Clouds, Hubbard Cave, Fairy Cave and Glenwood Caverns.

“In the context of these other caves and their long influence on the economy of Glenwood Springs, the importance and significance of Witches’ Pantry is readily apparent,” Rhinehart said.

The cave also lies within the area proposed for limestone mining by Rocky Mountain Resources, and would be destroyed if the mine expansion were to be allowed, he said.

Rhinehart and McFarland will talk about their plans for further probing the cave system.

“We don’t know much about the new cave since it was only discovered in October, and we had just a handful of visits before it was closed for the winter,” Rhinehart said.

The cave area is managed by the U.S. Bureau of Land Management, which has regulations governing the use of caves on public lands.

“If the BLM will allow, we’ll be back in March and April to dig through the squeezes and the blowing crawl to see where it leads,” Rhinehart said.